One of my biggest pet peeves that can happen to a film is when the story is either so boring or so ridiculous that it becomes a chore to finish it. My brothers think I have a problem where even if a movie is not that good or even if it’s boring I have to finish it (I have only ever turned off one movie in my life because it was terrible and it was Napoleon Dynamite). In my adventures of being a classic film fan I have come across so many that have been a chore to sit through. Woman Chases man was one of those several classic films.
B.J. Nolan is a former millionaire. He had invested in a neighborhood that was to be named after him but now his money has been dried out. The building company now wants to pull out of building the new homes unless he can come up with a million dollars. A few moments after B.J. hears this news a young woman named Virginia Travers (Miriam Hopkins) comes into his office. She is an architect looking for a job designing homes for Nolan Heights. Virginia really believes in this project. When B.J. tells Virginia she collapses not from the bad news but from not having eaten in a long time since she does not have a job.
B.J. takes Virginia back to his home. He tells Virginia that he has squandered his fortune on bad investments on inventions that did not pan out. His son Kenneth (Joel McCrea) has a million dollars his mother left him when she passed away. Unfortunately Kenneth will not loan his father a cent after all his bad investments. B.J. comes up with the idea to have Virginia get the money from him by pretending to be interested in him.
Kenneth returns home to find his father not home (B.J. pretends that he has gone away to Chicago on business) and Virginia as a guest. All the regular servants have been replaced by two of Virginia’s friends. Kenneth has returned home with a woman Nina who is only after his money and a man who is supposed to be her uncle but is really her lover. Nina and Virginia find out that Kenneth does not drink because the last time he was drunk he begins to bet and spend money.
The rest of the film is just shambles. It gets ridiculous and embarrassing for Joel McCrea and Miriam Hopkins. 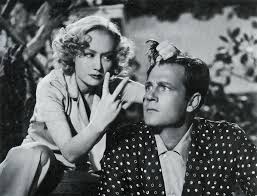 I normally like Joel McCrea and Miriam Hopkins together usually their films together are very good. This film was such a waste of their talents. The writing of these characters was just terrible and you can see that both actors did as best they could with what they were given.

Woman Chases Man is a film to find only if you are a fan of Miriam Hopkins or Joel McCrea and honestly even then it is almost not worth wasting your time. I was actually angry watching how badly this whole film played out.