"Life, every now and then, behaves as though it had seen too many bad movies, when everything fits too well - the beginning, the middle, the end - from fade-in to fade-out."

The Barefoot Contessa is told through flashbacks by three men at the funeral of a woman they all cared for and loved.
Harry Dawes (Humphrey Bogart) begins the flashbacks. He met the woman Maria Vargas (Ava Gardner) years ago in a bar in Spain. Maria was a dancer at the bar and its main attraction. Harry, a screenwriter, was traveling with his boss Kirk Edwards and his press agent Oscar Muldoon (Edward O’Brien) looking for new talent. Kirk heard about Maria and her beauty and wants to meet her. Maria makes only one appearance a night and refuses to come out of her dressing room. Frustrated, Kirk sends Harry back to speak to Maria since Harry is a nice calm guy. He speaks to Maria telling her that Kirk can offer her money and fame. Maria seems uninterested. Harry returns to the table and Kirk is ready to have a major fit. Maria comes out to speak to Kirk and Harry but does not commit to anything. Harry goes to Maria’s apartment that night where she lives with her parents. Her home life is not very good. He notices she does not wear shoes for very long. 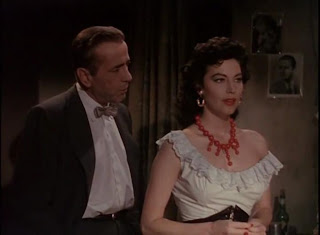 Maria eventually does agree to come to Hollywood. She becomes a major success. Harry and his wife act as sort of guardians of Maria. He cares for the actress as if she was a young sister. Kirk desires Maria to the point where gets into a sort of pissing match with a sketchy millionaire who also desires Maria. Kirk makes a fool of himself during this match which takes place at a party in front of several people. Maria winds up walking away with the millionaire. 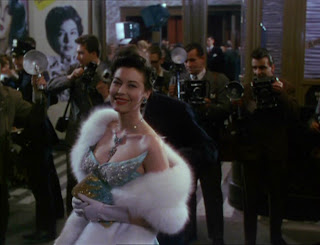 The next flashback is told by Oscar. Oscar became fed up with Kirk and became publicist to the millionaire Maria was then seeing. One night in the south of France at a casino the millionaire had been gambling all night with Maria by his side. As soon as she left his luck turned and he became furious with her yelling at her in front of the other guests. A man came in from the other room, slaps the millionaire in the face and walks out Maria.
Now the flashback is told by Count Vincenzo Torlato- Favrini the man who slapped the millionaire. He recounts that he cannot remember what made him drive from his home in Italy to the hotel in the south of France. As he was driving through the country side he came across a camp of gypsies. Maria is dancing with the gypsies as if she was one of them. That night Vincenzo sees Maria being yelled at by the millionaire and he is the one who slaps him and walks away with her on his arm. They fall in love and eventually marry. Unfortunately on their wedding night Vincenzo tells Maria that he is unable to father children due to a wound he sustained in the War. 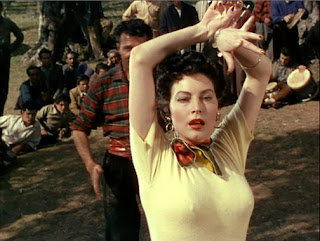 Harry ends the series of flashbacks with the last time he had seen Maria. It was the night she died. He was in Italy scouting for locations for his next film. Maria came him to him upset about how she could not have any children with Vincenzo. She claims she will have a child no matter who with she wants to give Vincenzo a child and she wants one. Harry goes to Vincenzo’s family home looking for Maria. He hears a gunshot go off and runs around to the back of the house. Harry sees Vincenzo carry out Maria’s lifeless body into the house. As Vincenzo calls the police to report he has killed his wife Harry sits with Maria’s body in arms and then lays her down and takes off her shoes.

Sorry if this review sounds a bit confusing and all thrown together. Trust me the story is ten times better than I have been able to describe (I did not have my notebook with me when I watched this I was at my grandma’s house at the time).
Ava Gardner deserves all the praise in the world for her performance. She was beyond brilliant. It is funny how Gardner made several films that reflected her personal life. She was always looking for love and found what she thought was love with men who did not suit her. Maria was not a wild woman like Gardner was but she was very close to the actress. Humphrey Bogart was great. Sometimes he gets on my nerves so bad in some of his films but here he played such a great character and really played his character’s kindness and admiration so well. I like Bogart outside of his bad boy roles. Before I had seen the film I thought that Bogart and Gardner’s characters were supposed to be in love which would have totally turned my stomach because to me Bogart is one of the least romantic leading men I have ever seen. Their characters had a great and respectful and protective friendship and I really liked seeing that I liked that Bogart was protective and not tough and that Gardner was not a sex symbol after his love and attention. 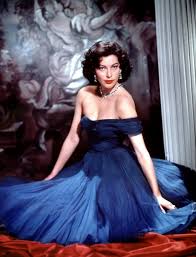 Joseph Mankiewicz wrote and directed the film. I love his storytelling and direction. His films are dialogue heavy but the dialogue is beautifully balanced out with his great direction. I love the shots he got of Ava Gardner she never looked more stunning.
The Barefoot Contessa moves along slowly but it is never boring. This is a film that should get more credit and be more known. Direction wise it is beautiful and moving. The story is fantastic because it does not show an actress who wanted to be loved acting like a no good woman it shows the actress as a human being who just wants to be loved by the right man. I highly suggest viewing The Barefoot Contessa.