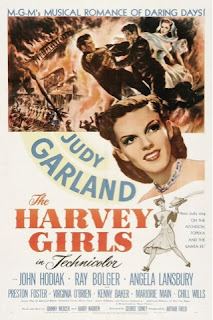 “Yeah, they say they have hair on their chest, the only thing I've seen is just a fancy vest. Holy smackers, milk and crackers but it's wild in the wild, wild west.”

The Harvey Girls was not a film I had planned on watching in the near future. I like Judy Garland, but to a certain extent. I will not go out purposely looking for a Judy Garland film unless there is someone I really like in it. Well before I watched this I had no idea Virginia O’Brien or Cyd Charisse were in it so they were not the reason why. I actually sat through The Harvey Girls to see Ray Bolger. Besides The Wizard of Oz I have only ever seen him in The Great Ziegfeld but his role was very small. Even in this film his role is small but he is so good.
Susan Bradley (Garland) is on her way out west to get married to a man she had been communicating with by letters. She loves the way he writes so passionately and lovingly she is so excited to meet him. On the train with Susan are a group of young women who will be working for a chain of Harvey restaurants. They see that Susan does not have any food left and offer some to her. 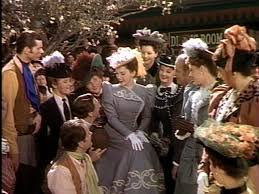 When Susan gets to the town she finds that Hartsy the man she has been writing to is nothing but a dumb hick. They both see they are not a match for each other and try to talk each other out of marriage by saying what they are terrible at doing. Hartsy tells Susan that he was not the one who wrote the letters he cannot write so he had the local saloon owner Ned Trent (John Hodiak. Susan is so upset she goes into the saloon without fear looking for Ned. She runs into Em (Angela Lansbury) who happens to be Ned’s girlfriend. Em and the other girls are not happy about the Harvey restaurant opening up across the street from them because it is a nice place and soon the saloon will be closed. Ned comes to the scene and Susan gives him a piece of her mind. 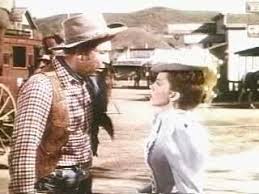 Since Susan is no longer getting married she gets a job at the Harvey restaurant. That night Ned comes to the restaurant and Susan winds up being his waitress. He tells Susan he wants a sirloin. When she puts in the order the kitchen tells her all their steaks have been stolen. Susan knows immediately where it has disappeared. She sneaks into the dinning where she steals two guns and sneaks out the front door. She walks over the saloon nervously. Somehow Susan manages to stick up the entire saloon and bring back the stolen steaks. 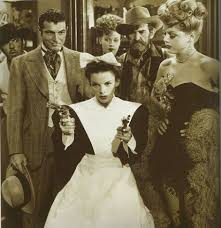 The reason the saloon manages to stay open in the town is due to Judge Sam Purvis (Preston Foster). By his order and the fact that the priest left the town church has been closed for a long time. Along with some of the bawdier men of the town Sam makes his mission to scare the Harvey Girls out of town. In the middle of the night he shoots out the lights in the girls’ room. This incident does scare off some of the girls but Susan along with Alma (O’Brien) and Deborah (Charisse) are determined to stay. Sam goes to the girls the next day and is the perfect gentleman. He knows that Susan has taken a liking to Ned. To make Susan mad at Ned he tells her that Ned does not want the church to reopen (Ned does want the church to reopen). Angry Susan goes looking for Ned in the saloon and is again confronted by Em. Susan has enough of Em’s bullying and puts the woman in her place.
Deborah has come out the west to try her hand at dancing for a living. During the day she hears a man singing at the piano in the saloon. She goes over and there is instant chemistry between them. He sings her a song of his and she dances to it. Susan looking for Deborah storms into the bar. Em is of course there and this time has her girls surround Susan. Deborah runs across the street to get the other girls. All the sudden a big brawl breaks out!
After this moment the film is a blur because stupid me did not pause it when my grandma called. All I remember is the restaurant being set on fire. And I do know that Susan and Ned get together but I cannot remember how.
The cast was excellent. Judy Garland was good. The woman had so much talent that it is a shame to hear that she caused so much delay filming it. I was dying in the brawl scene she was hilarious. Virginia O’Brien from the moment I saw her face I was laughing so hard. I have been a fan of her since I saw her performance of “Salome” in Du Barry Was a Lady. Her character unfortunately disappears after a number because she was pregnant and Judy Garland delayed filming so much that her pregnancy was becoming a problem to hide. Alma was a wise cracking character and O’Brien was perfect she kept such a great straight face. Cyd Charisse was outrageously adorable and gorgeous. I loved it when she met the man in the saloon and during the brawl they hid under the table and I think they kissed. Charisse had a very good number with Garland and O’Brien it was beautifully done by all three women. Ray Bolger was barely in the film but he almost stole it. He was so funny. He had a pretty decent dance number. It was cute seeing Bolger dance with Garland. I am convinced Bolger was born dancing he was so limber and active with his dancing. He did not let me down with him being the reason I wanted to see The Harvey Girls. Angela Lansbury was perfect! She was only nineteen years old when she made this. Along with Bolger she almost stole the film. Lansbury had a very commanding presence in this, I am not sure if that was because of her acting, her character or costumes… maybe it was all three. I liked John Hodiak but I felt he was out of place in this light naive musical. He could fit into a western but not an MGM musical western. 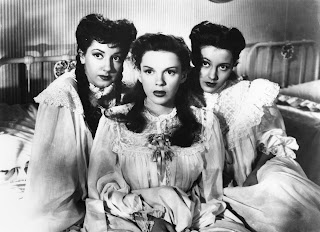 The Harvey Girls was a cute musical. There were some very good numbers, some hilarious scenes, and every single cast member did a wonderful job in their roles. The Harvey Girls is one of MGM’s long list of great musicals that should not be missed.