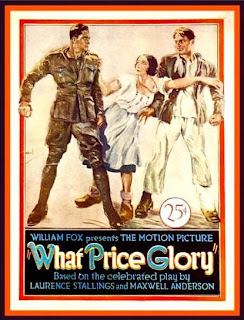 “Charmaine, this war and racket is sorta a religion.”

Very few films deal with World War I. It was an important war yet it seems to just be a cliff note in history classes (for America at least it seems to be that way). Of course during the 1920s WWI was still on the minds of Americans and other countries and the movie industry told stories about that war the way they would with the Second World War. I have seen a few silent films that dealt with WWI such as J’Accuse and The Big Parade. Both of those films were incredible and beautiful and moving. I have seen Wings and was not too impressed but I can see how it was important. I have recently watched the 1926 film What Price Glory?. I was not very impressed with that film either. But where Wings had a decent story and plot What Price Glory? was two men with huge egos who just fight over the same girl.
What Price Glory? basically just tells the story of two soldiers named Quirt and Flagg. They were stationed in China for a few years together and in that time they were always fighting over women. Flagg is eventually sent to France at the beginning of “the war to end all wars” as a captain. He tells his men not to flirt or get into trouble with the local girls in the village they have been stationed at. Flagg of course breaks his own rules and begins seeing Charmaine whose father owns an inn.
Flagg’s unit is sent to the front and sometime later they come home. He is to move his troops onto another part of the front but he has to wait for his new sergeant to come in and help. The sergeant comes in and he turns out to be Quirt. Almost right away the men are fighting over Charmaine.


What Price Glory? is two hours of two men fighting over a girl. There are parts that dragged and were not entertaining. I was sad that I felt this film was so lackluster because Raoul Walsh was the director and he is one of my favorite directors. His direction was not bad at all it was just the story and plot that was terrible. One reviewer compared this film to The Big Parade. That to me is blasphemous. The Big Parade is a beautiful story with a character that was sympathetic and likable. Neither Quirt nor Flagg was likable. They were annoying beyond explanation. Charmaine played both of them but I found her to be the only real likable character. What Price Glory? was definitely not the best war film I have ever seen and is definitely not the best one at all that takes place during World War I.
Posted by UneCinephile at 11:03 PM