Who are you?
I am Death.
Have you come for me?
I have long walked by your side.
So I have noticed.
Are you ready?
My body is ready, but I am not.

Before watching The Seventh Seal I had only ever heard of Ingmar Bergman. I always see the DVDs/Blu Rays on the Criterion collection. I was interested in seeing his films eventually. Last time my brother Anthony was home school he saw a pack of Bergman’s films and asked if I had ever seen anything by the director. Two weeks ago Anthony told me he wanted to see The Seventh Seal by Bergman. I guess he had just discussed some of Bergman’s films in his film class and The Seventh Seal was one of them. I got on the ball to see the film since it was something I had never even heard of by a director whose films I had not seen. I enjoyed the film from beginning to end.
The Seventh Seal is philosophical with a lot of allegory. The story is about a knight who has just returned home to Sweden from the Crusades named Antonius Black who begins a game of chess with Death. If Antonius wins him and anyone who travels with will live. He accompanied by his squire Jön. Along the way the two knights come across a group of traveling actors, a blacksmith and his wife, and a young servant girl. 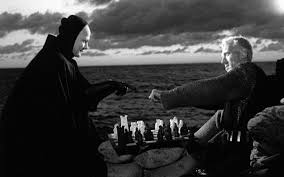 I liked the story. I liked how it questioned God and dealt with death. Several scenes reminded me of The Canterbury Tales. You can tell just from the way Bergman wrote and directed the film that he put a lot of care and great thought into it. The cinematography is incredible especially the beginning when Antonius meets Death on the beach.
The Seventh Seal can become a bit tedious since the story is very profound and philosophical and you have to read the subtitles. I do not mind foreign films and reading subtitles at all but this film is so visually stunning that I was looking away from the subtitles and missed certain things. I will definitely be getting the film on Blu Ray whenever I can afford it I feel this is something I need to watch a few times to really understand and appreciate. After watching The Seventh Seal I looked forward to seeing more of Ingmar Bergman’s films.

Posted by UneCinephile at 11:59 PM