“You have to think like an American. You'll feel so homesick that you'll want to die, and there's nothing you can do about it apart from endure it. But you will, and it won't kill you.”


A few years ago I lived in London for a month. It was through a study abroad program for college. It was so much fun but it was also the first time I had ever really been away from home for so long and I was very homesick. I missed my family and my own bed and air conditioning. If I were to go to London now I think about the only things I would miss are my bed, air conditioning, and my familiar surroundings (do not get me wrong I would miss my family a lot but just not as much). I give people who move to different countries so much credit. With today’s technology and means of travel it is easy to keep in touch and see family members. I cannot even imagine what it must have been like when there was just letters and the very rare long distance phone calls to keep in touch and weeks of ship travel to see your family if you had the money to do so. The movie Brooklyn gives a glimpse into an Irish immigrant to America in the early 1950s.
Eilis Lacey (Saoirse Ronan) lives in Ireland. She works as in a bakery shop and lives with her sister Rose and their mother. Rose has gained Eilis a sponsorship to live and work in America in Brooklyn. Eilis wants to go she wants to do something more with her life but she will desperately miss her older sister and her mother and Ireland. 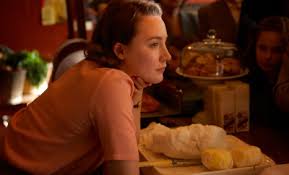 The trip to America does not go too well. Eilis travels by ship and one of the first nights on board there is a bad storm and she and all the passengers wind up becoming very sick. Eilis is placed in a boarding house run by an Irish woman with female Irish boarders. She is miserable for months because of how homesick she is. The girls at the boarding house convince Eilis to go out to the church with them for a dance. At the dance Eilis meets an Italian guy named Tony.

Soon, because of Tony, Eilis is not constantly thinking about being home. She has Tony on her mind and they are very happy together. Eilis’s happiness is soon tested when something happens back home in Ireland. She has to go back home and Tony is worried she will not come back. To give her a purpose to come home Tony asks Eilis to marry her and they marry the day before she is to leave. 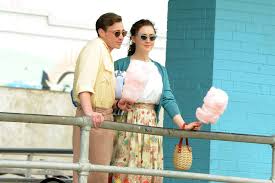 In Ireland Eilis is happy. She is with her mother and her friends and so many opportunities come about for her. Of course Eilis is now conflicted because she is married to Tony. Her confliction goes away once she sees how nothing has changed in the town and how nothing will. Eilis realizes she truly loves Tony and misses him and misses her new life in Brooklyn.


Brooklyn was a very good movie. It was different for a movie dealing with loneliness and homesickness and immigration. I LOVED the costumes. I love studying fashion and about costume design. The fifties are one of my favorite decades for clothing so I was in total heaven. The costumes were beautiful I wanted pretty much everything Saoirse Ronan wears. Ronan is currently up for Best Actress at the Oscars for her role of Eilis Lacey and the movie is also up for Best Picture. Her acting and the movie were good but they are definitely not Oscar worthy, well to me anyway. Like I felt terrible for Eilis, Ronan did a great job portraying the loneliness and homesickness of her character but to me it is not Oscar worthy. There is nothing about the movie or Ronan’s acting that I feel warrants Oscar nominations. We will see how the Brooklyn fairs at the Oscars. Despite my feelings about the nominations Brooklyn is definitely worth seeing.
Posted by UneCinephile at 10:42 PM