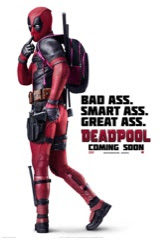 “You're probably thinking "This is a superhero movie, but that guy in the suit just turned that other guy into a fucking kebab." Surprise, this is a different kind of superhero story.”

I like superhero movies. I am obsessed with Captain America I can watch that movie all the time. Marvel is fantastic with their superheroes they are perfection, I don’t know about, but I am feeling a bit of a burn out with Marvel movies. They are tending to be the same with a little tweaks depending who the superhero is. Most of them are getting mushy and really over dramatic. Please do not throw things at me with my feelings and observations I do like the Marvel movies but I am allowed to get a burn out! My burnout was cured and my interest renewed in Marvel with the release of their hilarious anti-hero Deadpool.
Wade Wilson (Ryan Reynolds) was once in the military until he was dishonorably discharged and now works as a mercenary. His life really did not have too much meaning until he met Vanessa. The two fall in love pretty much right away. Their happiness comes to a grinding halt when Wade is diagnosed with terminal cancer.
One night while at his local bar Wade is told some guy is waiting for him. The guy offers Wade the opportunity to be cancer free. Wade is skeptical at first but he loves Vanessa and wants the chance to spend the rest of his life with her. He goes to a warehouse where a guy known as Ajax is performing experiments. Ajax tells Wade that he is experimenting on giving people super powers. Wade being the joker and pain in the ass that he is never shuts up and once he finds out Ajax’s real name is Francis he becomes relentless. And because Wade keeps making fun of Ajax, Ajax puts him into this machine that deprives Wade of oxygen. The oxygen deprivation winds up doing something to Wade’s skin and he looks like a nasty old man.
Eventually makes it out of the warehouse and with the superpower of healing. For the next year Wade works on seeking his revenge. He comes close to killing Francis on a bridge but he gets away all due to two X-Men trying to help him.

That is all I am going to say about Deadpool because it is so good and insanely hysterical. 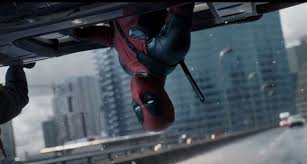 I loved Deadpool literally from the moment it started. The credits are a fucking panic. Every line that Wade speaks is full of the best sarcasm and wit. Deadpool is the best anti-hero I have ever seen in a movie. I am so damn happy Deadpool was made and that it is currently doing so well in theaters. I tend to root more for the snarky, sarcastic, anti-hero characters in stories than I do the straight-laced-and-have-their-shit-together characters. Ryan Reynolds was beyond brilliant he was so perfect in the role. I am praying that Marvel makes another Deadpool movie because I want to see more of the character and Ryan Reynolds playing him.
If you have yet to see Deadpool you are a crazy person and need to see it as soon as possible.

Posted by UneCinephile at 11:34 PM