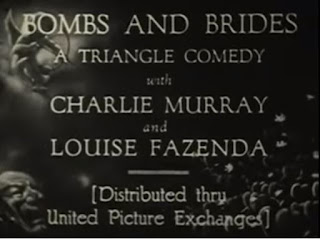 I am going to put out a bit of a warning for this review of the silent film Bombs and Brides. The warning is that I did pay attention to the film but I had a bit of a hard time following what the hell was going on! To be fair to myself I do have ADHD and I do have somewhat of a hard time following certain films with certain storylines. Also if I a film bores me quickly or I am not in the mood to watch a film but I have to for this blog my attention disappears. When it came to me watching Bombs and Brides it was a combination of all of these things. So here is my attempt at summarizing Bombs and Brides.
A new mayor named O’Dogherty has been elected. He has a young daughter who is in love with his stenographer. O’Dogherty is a crooked man. In order to get elected he had bribed people to vote for him. One man he had bribed is an Italian man named Tony whom he had promised to make a police officer. O’Dogherty blows Tony and his friends off and goes back on his promise.
The Campaign Manager is supposed to be marrying Tony’s daughter. While at the office he calls the daughter to tell her that he does not want to marry her anymore. The Campaign Manager is now in love with O’Dogherty’s daughter. Tony and his friends are already fired up when they arrive to see the daughter upset. Tony and his friends decides to try to blow up the mayor’s office. That plan backfires when the bomb Tony sent to the mayor winds up getting thrown out the window.
The mayor’s daughter calls the Stenographer to come and pick her up so they can run away to get married. The Campaign Manager was listening in on the conversation on the other line. He tells the Stenographer that he has to stay. The Stenographer stays for a few seconds and then bolts for the mayor’s daughter.
The rest of the film gets crazy with people running around chasing each other for one reason and another.


Bombs and Brides, what I was able to follow and pay attention was pretty funny. It was silly fun. Mack Sennett directed the film and I believe that this is the first time I have ever watched a Mack Sennett film. I am looking forward to watching more of his films. Bombs and Brides is a film I recommend seeing if you like silent comedy films. You can watch Bombs and Brides in full on Youtube.

Posted by UneCinephile at 10:53 PM