Movies dealing with people breaking into homes and terrorizing the owners are fucking terrifying. They are not my favorite types of movies to watch in the slightest. Besides the fact that they are terrifying they always seem to be the same to me: bad guys come into a home, beat the homeowners up, then the homeowners somehow manage to wear down and outsmart the bad guys, and the police finally come to their rescue in the end. Well, I think I finally found a home invasion movie that is truly different and really good. That movie is Intruders.
Anna (Beth Riesgraf) has been taking care of her sick brother Conrad for a few years. She had food delivered by this guy Dan (Rory Culkin) every day. They become somewhat close from seeing each other all the time and she invites him in. Anna shows Dan that she has a box of money and offers it to him to go away since, as she says, has no need for all that money. Dan refuses to take it no matter how nice the offer is.
Conrad eventually passes away. Anna it turns out has crippling agoraphobia and cannot even make it to Conrad’s funeral. As she sits on her couch Anna notices a truck has pulled into the drive way and three men get out. One of them mentions money and looking for it. Anna runs and hides as the three men come into the house. The house is large enough for Anna to hide and avoid detection. She makes a run for the door but stops because of her agoraphobia. One of the guys, Vance, takes her into her bedroom. Anna manages to snap out of her haze and run away and hide again. Vance finds her in the bathroom and she stabs in the neck with a large, pointed hair clip. Dan had come by to check on Anna. J.P. and Perry had tapped his hands to the couch. He was the one who mentioned the money to Vance. Anna figures it out and breaks two of Dan’s fingers. She drags him to the basement door and pushes him over into it with J.P. and Vance. They manage to break down the door Anna left through and they find some pretty twisted things in other rooms.
All three men tragically/un-tragically learn that Anna has quite the number of psychological issues besides her crippling agoraphobia. I cannot give away too much more of Intruders. Just know that Anna is dark and twisty yet totally awesome.
You may be wondering if I think home invasion plots of movies are fucking terrifying and all the same then why on earth did I sit through Intruders. Let me put it to you this way, when I like an actor or actresses I will watch whatever movies and TV shows I can find them in. I cannot even begin to describe how much I adore Beth Riesgraf as an actress. I am a huge, massive fan of Riesgraf’s from the show TV show Leverage where she played the amazing character of Parker. I have since then seen her in a few other shows where she has been a guest star and even some bit parts in other lesser known movies and I just adore Riesgraf’s acting so much. The woman has some awesome range. On Leverage her character was nuts she was silly and hilarious and yet could be serious and emotional. Riesgraf was insanely talented and perfect in that role. She was really good as Anna especially because this was such a dark character it was so much darker and dramatic than I am used to seeing her be. Riesgraf nailed it she made Anna so vulnerable like you wanted to protect her and at the same time so creepy you did know what to feel for her. I will stop here because I can probably write a whole other page of just fan girl ramblings about how much I adore Beth Riesgraf. If you have Netflix do yourself a favor and go watch Leverage right now. Besides Parker the show is fucking brilliant. 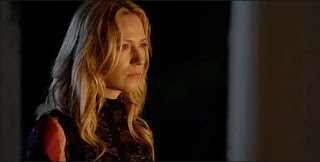 Intruders is a good movie. I was thrilled to see that it was a different type of home invasion story. Vance, J.P., Perry, and even Dan had no idea who they were dealing with, with Anna and that was the greatest twist. Intruders is not one of the greatest movies ever made but it is one of the best home invasion-plot movies I have seen and is definitely one that I highly recommend seeing.