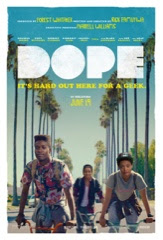 Malcom is a senior in high school in a bad neighbor of Inglewood, California. Him and his two friends, Diggy and Jib, are majorly obsessed with ‘90s hip hop to the point where they dress in the style of the decade and have MTV shows recorded on VHS. All the three friends want is to get into good colleges and away from their neighborhood. Malcom is a little arrogant, he has straight A’s and thinks he can get to Harvard just on his grades and his SAT scores. For his college essay Malcom plans to write about a rapper and their lyrics.

Riding his bike on the way home from school, Malcom and his friends are being chased by some kids in a gang. He is called over by a guy named Dom. Malcom nervously begins to talk about hip hop and Dom likes Malcom and invites him to a club. Going to clubs and parties is not something he would normally do but he decides to go because a girl he likes will be there.

At the club Dom takes Malcom’s backpack and places it behind the bar. Dom goes into a backroom where a drug deal is going down. The place gets shot up and Dom runs out of the room and ducks behind the bar. Everyone runs out and Malcom grabs his backpack.
The next day while walking through the metal detectors the detector goes off. He has no idea why it is and since he is a good kid the guard lets him go through. When Malcom checks his bag he finds a gun and bags of the drug Molly. He tries to give it to Dom and a few other people but no luck. Since he cannot get rid of the drugs Malcom decides to sell the Molly on a website using bitcoins so nothing can be traced. Of course there is craziness when it comes to Malcom, Diggy, and Jib selling the  drugs.
In the end Malcom becomes a stereotype of his neighborhood, a black teenager with a single mother whose father left them when he was young and sells drugs. But unlike most of the teenagers in his neighborhood Malcom is brilliant and has hopes of becoming something more. Instead of writing about hip hop and lyrics for his college essay Malcom writes about the struggle he has just gone through and how he became a stereotype.
I really liked Dope. When the movie was over I had thought that the story was like a nature vs. nurture. Malcom was not a bad kid despite his mother working and despite his neighborhood but then he fell in with the nature of his surroundings. That nature, though, did not wind up defining him he rose above it. Besides the story I really liked the cinematography it was bright and reminiscent of the florescent colors the 90s seemed to enjoy. The acting by everyone was great and so was the direction. Dope is a movie I definitely suggest seeing. It is currently available to view on Netflix.