“Lost treasure has ever lured the adventurous- and today countless chases seemingly wild and impossible are under way to salvage the vast wealth sunken by raiders and submarines in the Great War.”

I think stories of people going looking for sunken treasure is fascinating. It is not something I would ever want to do myself since the ocean freaks me the hell out in every single way but what I find fascinating is how explorers go looking for the treasures and how they act as detectives to locate the sunken vessels with the lost treasures. One story I find interesting is a wreck that happened in the 1800s. There was a ship that went down in a storm mostly because it was carrying so much gold bars that weighed it down. The lost gold caused a financial panic in the 1800s. A man found it after many years of trying to find but it turns out the cold is a bit cursed. Everyone who comes into contact with it has a bit of bad luck. One of the gold bars in currently on display at the museum I am interning at (The Museum of American Finance which is located on Wall Street). The gold bar was used as part of a tour for this company called Museum Hack. Me and the collections manager went on a Museum Hack tour because we have never been on one (it was amazing! It was like a dream to my museum nerd heart). The tour guide told us that the gold was cursed! Me and the collections manager looked at each other because she had put it on display!
Looking for lost treasures of sunken ships has captured the imagination of people for decades. So many films and books have been written about explorers and adventurers looking for lost gold. One such film is a silent from 1920 entitled Terror Island.
Harry Harper (Harry Houdini) has created an important submarine for finding treasures called the Hawk. In the local newspaper there is a story about a sunken ship full of diamonds and there is a big fortune for anyone who finds it. Harry had hoped to keep his invention a secret but it somehow got leaked to the newspapers. 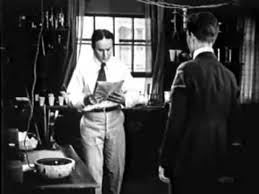 Job Mordaunt, known as the “meanest man in town” is looking for the diamonds just like everyone else. His son Guy (a very young Eugene Pallet) is in on the idea with his father but has some plans of his own to get the diamonds for himself. Guy calls Harry to discuss double crossing his father. Guy claims to have a map from his cousin Beverly and if he can get a hold of it he wants Harry to come with him to get the diamonds and split the profit. Harry tells Guy he does not do business with crooks. 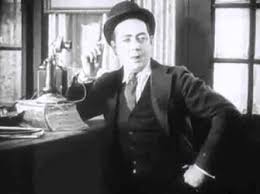 Beverly has a letter from her father that a pearl he gave her that is shaped like a skull was from an island where he has been taken prisoner. He writes that she must bring the pearl back to the island to rescue him and the native will show him where the sunken ship with the diamonds is located. The natives have given her father until the day of their feast day to bring the pearl back.
Since Beverly does not trust her relatives she goes to Harry after reading about his new invention. He agrees to help her mostly because he does not want to do business with her uncle or cousin. As soon as Beverly get home she is attacked and chased by her uncle and cousin. Harry fears for her and runs to her house just in time before Mordaunt and Guy could do anything to her.
Mordaunt finds Harry and attempts to kill him and kidnap Beverly. Mordaunt and Guy take them both onto a ship but Harry manages to escape and takes his submarine to the island where Beverly’s father is. Unfortunately, Harry is somehow recaptured when he goes to save Beverly. But what kind of film would this be if a rescue did not go over well? Harry and Beverly manage to get away again and swim down to the submarine.
Beverly’s uncle took the pearl from her. Harry and Beverly go to different sides of the island to observe Mordaunt giving back the pearl. By doing this Harry figures they can still get the location of the sunken ship. The native get their pearl back but in exchange for her father and the pearl they want Beverly as their sacrifice.
Harry makes it down to the native and they quickly hang him by the neck. Can it be called “pulling a Houdini” if Harry Houdini actually escapes, well, like himself? Yeah, I guess so. Harry pulls a Houdini and escapes the native’s hanging device. While Harry was struggling to get free the natives put Beverly into a safe from the downed Hawk and throw her into the ocean. Harry saves her and also manages to get his hands on the jewels from the Hawk. He comes up to the island and the natives are so impressed by him that they let Beverly and her father go free.

Terror Island was good. I found it more exciting and engaging to watch than Harry Houdini’s other film I recently viewed, Haldane of the Secret Service. There was plenty of action and tension with the underwater and fight scenes. If you like silent films and would be interested in seeing Harry Houdini act in a film Terror Island is definitely worth watching. It is available to view in full on YouTube.

Posted by UneCinephile at 10:29 PM