The Witch Woman or The Parson’s Widow takes place in the 1600s. A young parson named Sofren has just finished his studies and is looking for a position at a church. He is in love with and wants to marry Mari but her father will not let them marry unless Sofren has a job as a parson.
A small village is in need of a parson. Sofren is one of three candidates for the position. The other two parsons are dressed well and were able to afford a good education at a university in Copenhagen. Sofren looks in on his competitors as they each give their sermons to some of the parishioners who will be deciding whether they get the position or not. His sermon is the only that catches everyone’s attention and he is chosen that night as the new parson. With his new position comes a clause, Sofren must marry the previous parson’s widow. This breaks Sofren’s and Mari’s hearts. The widow, Dame Margarete, is old and there are rumors that she is a witch.
Sofren goes to see Dame Margarete in her home one night. Since it is late she makes Sofren spend the night. In the morning Margarete gives Sofren new clothes and food and alcohol. By the middle of the day the alcohol has put such a haze on Sofren’s eyes and mind that he sees Margarete as a young beautiful woman and says that they must be married.
One day in town, after he and Margarete are married, Sofren is at the church speaking to Mari. Margarete comes walking along that point and sees them together. Sofren covers by saying that Mari is his sister and she is upset that she has to live away from him. Margarete lets Mari comes live with them as the parsonage.
For some time Sofren tries his hardest to meet with Mari to be alone with her but everything they do to be with each other just backfires. They even try to scare the old woman to death a few times and that does not work either. Sofren and Mari come to respect and see how kind Margarete is when Mari falls down a ladder and hurts herself. For months after that incident Margarete takes great care of Mari. Margarete tells them that her husband, the former parson, had to marry the parson’s widow. It was five years before they could be together. Sofren confesses that Mari is not his sister. 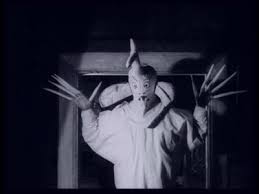 From that time on Dame Margarete spends more time at the grave of her husband and goes off on her own for long periods of time. One morning Mari notices that Dame Margarete cannot be found. She and Sofren go to Dame Margarete’s room and find that she has died. Sofren finds a note from Margarete instructing him to leave a horseshoe over the door and to scatter linseeds so her soul will not haunt them.
Dame Margarete’s death saddens both Sofren and Mari. They came to admire the old woman. Sofren says that she taught him to be an honorable man.


The Witch Woman or The Parson’s Widow was a decent silent film. It was able to hold my attention. Carl Theodor Dreyer’s direction is, as always, so stunning and so touching. He was able to make me feel sad for the main characters when they could not get married right away, their childishness with trying to scare the old woman, their love and devotion for each other, and their sadness and humility when the old woman died. Dreyer is such a great director. He is one of the only directors whose films I have watched where I am actually able to feel whatever emotion or feeling is being conveyed. If you like watching silent films definitely give The Witch Woman (as it is titled on YouTube where you can watch it in full) a try.
Posted by UneCinephile at 9:52 PM