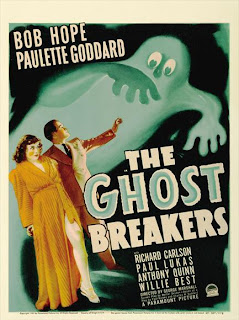 “Are you the one advising Miss Carter to sell the castle?”
“No, my advice is keep the castle and sell the ghosts.”
The Ghost Breakers is not a typical ghost story. It is a comedy film starring two very funny people, Paulette Goddard and Bob Hope. The film has its silly moments just like all old comedies but the silliness does not go over the top here. There are many small, sneaky jokes that you have to sometimes listen for carefully.
Goddard plays Mary Carter who has just inherited an old family castle called“Castillo Maldito” on an island off of Cuba. She is repeatedly warned with death threats against going to the mansion but curiosity and, in a way, a sense of family pride gets the better of her and she decides to go anyway. Hope plays a radio host named Larry Lawrence (“Your name is Lawrence Lawrence?” “My parents had no imagination.”). He gets into trouble with a crime boss after he does an expose on him. The crime boss calls Larry to the hotel where he lives and where Mary also happens to be staying. The hotel experiences a blackout along with the rest of the city during a lightning storm. Larry jumps at the sound of a gunshot and accidentally fires his own gun. When the lights go on there is a body on the floor and he thinks he shot the man lying on the floor.
Mary hears the shot as well and opens the door. Larry comes into Mary’s room. She had just been listening to his broadcast on the radio and takes a liking to him. The police arrive and knock on Mary’s door; they have to search every room on the floor. Larry hides in Mary’s luggage case. Before she can open the case to let Larry it is taken away to be boarded on a ship to Cuba.

On the boat, Larry and Mary as well as Larry’s friend Alex learn that Larry was not the killer someone else killed a man named Medereo who was supposed to be taking Mary to Cuba. Larry and Alex act as Mary’s bodyguards keeping watch on her door and outside on the ship’s deck. A man named Geoff Montgomery who Mary knows said that he knows Cuba inside and out and he could be her guide around the island.

On the night the group arrives in Cuba, Larry and Alex go to the castle leaving Mary behind so nothing will happen to her but she comes by later on determined not to be left out of the action. They come across strange goings on and a killer no one saw coming.
Paulette Goddard and Bob Hope were so adorable together. This was their second film together they had made a film called Cat and the Canary before this.  Their camaraderie is perfect they just worked so well off of each other. Both actors did wonderfully in their parts. One scene I really enjoyed between Goddard and Hope was when Larry was trying to comfort Mary after someone had posted a death threat on her door. Larry starts pretending to be a society person saying how he would like to take Mary to a dance and Mary plays right off of him and does the same thing. I give Goddard so much praise for her comedic timing she was very capable and able to keep up with Hope and deliver her lines perfectly.

As I said in the beginning, there are many funny lines where if you are not listening carefully or paying attention you will miss them. I found many of the line quiet clever. In the castle Larry and Alex fight off a zombie. The zombie put on armor to hide so he could attack the two men. Larry yells out as he is fighting the zombie “Quick get the can opener!” When Mary got to the castle she ripped her bathing robe (she swam up to the castle when she got off a small fishing boat) on the stairs after something frightened her. She finds an old dress in the trunk and puts it on. When she comes down the stairs after changing Larry and Alex have just finished fighting off the zombie. The zombie opens the door and scares Mary into Larry’s embrace. Larry likes this reaction and jokingly tells Alex to open the door again.

This was the third time The Ghost Breakers was made into a film. The story originally appeared on Broadway then as a film in the years 1914 and 1922. The 1922 version was directed by Cecil B. DeMille. Unfortunately both original prints of the films are considered lost. In a scene in this version before the boat pulls into harbor, Larry comments on the history of the castle saying “Sounds like a Cecil B. DeMille script.”
Iconic movie costume designer Edith Head designed the clothing worn in the movie. Her costumes were a great touch of chic.
No “scary” movie would be complete with a little zombie action. Larry and some of the other character mention how there is voodoo being done around the castle and a zombie is said to roam the grounds. They talk about how horrible it must be to not have a mind of your own like a zombie. This reminded me a bit of the film I Walked With a Zombie.
The Ghost Breakers is a good old comedy film that is guaranteed to make you laugh. What is so great about this film is that something like this was not done before. To this day The Ghost Breakers is still fresh and funny.
﻿

Posted by UneCinephile at 12:43 AM