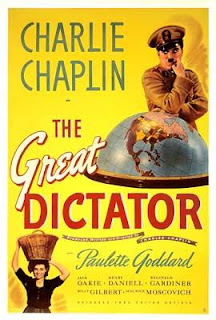 “I should like to help everyone if possible; Jew, Gentile, black man, white. We all want to help one another. Human beings are like that. We want to live by each other's happiness, not by each other's misery. We don't want to hate and despise one another.”
I have seen so many films that I barely see them as something that can move me. A funny thing happened when I watched Charlie Chaplin’s first talking film The Great Dictator; I was moved, I felt its meaning and its power. When the film was over all I could say was “wow that was truly amazing.” The film is funny, dramatic, serious, and silly.
Charlie Chaplin plays the roles of a dictator named Hynkle of a fake country called Tomainia and a Jewish Barber who served in WWI and has lost his memory after a plane crash. Each character represents the evil and insanity and the goodness and innocence of the world.
With Hynkle he is such a crazy character that you cannot hate him you kind of just have to pity him. The sad thing is that real people like Hynkle were crazy like him. There are many great scenes in this film that show just how eccentric Hynkle is. The first time we see the dictator he is giving a speech to the Tomanian people. His speech is “translated” to English from a pre-written paper. One of the best aspects of this character is when he speaks “German”, the “German” is some made up gibberish with some real German words thrown in here and there.
﻿
Another fabulous Hynkle scene is when he jumps all over his office with a balloon globe. It feels like you know what he is thinking, he’s thinking how the world will be his and it will be perfect and free of undesirables. But in the end his balloon globe pops in a great foreshadow.
The Jewish Barber was played excellently. He is kind and cares for everyone and everything. There is no name for this character he is just The Jewish Barber. One day he gets away from the hospital he has been in since the War. He goes back to his barber shop in a small town. When he opens the door cats come running out. The word "Jew" has been written on his window and he does not understand why. When the storm troopers come walking through town he cannot comprehend why they are picking on him and writing on shop window. He goes to run away with the troopers chasing after him when Hannah, the local girl, hangs out the window and slams a frying pan on the troopers’ heads. The Barber and Hannah become friends. He gives her a makeover removing dirt from her face and giving her a nice hair style. On their first date Hynkle has decided to raid the ghetto.
The Barber, Hannah, and people from living in the building surrounding a courtyard were protected from being bothered by the troopers from a man named Commander Schultz. The Barber had saved Schultz’s life in the War so when the storm troopers were harassing the Barber Schultz told the soldiers that they were not to harass anyone as long as they are in the courtyard. Schultz asks The Barber if he remembers him from the War and the man’s memory comes back to him.
Schultz stands up to Hynkle about attacking the ghetto. This angers the dictator so he has the commander thrown into a concentration camp. The commander manages to get away from the camp and escapes to the courtyard. The storm troopers come around again looking for The Barber and Schultz. The two are eventually caught and put into a concentration camp.
Hynkle wants to invade neighboring Osterlich so his men tell him to go on a hunting trip so he will not be held responsible. The Barber and Schultz manage to escape the camp wearing soldier uniforms. Two troopers are looking for The Barber when they hear Hynkle splashing in the water, they think he is The Barber and arrest him. Drawing nearer the border of Osterlich The Barber is mistaken for Hynkle and is taken to a rally.
Charlie Chaplin breaks character to deliver what is possibly one of the greatest scenes in movie history:
There are many small things in this film that were cleverly done and said. When Schultz sees The Barber for the first time in years he says to him “I thought you were Aryan” and The Barber replies “No, vegetarian.” When Hynkle is at the train station waiting to meet Napoloni he lifts his arm up in his salute and scratches his armpit nonchalantly.
One scene I really liked was when Hykle is driving down the road along the main boulevard there is a Venus of Today statue that looks like the Venus de Milo and The Thinker of Today that looks like The Thinker both with their hands raised. I liked these two references because during World War II Hitler looted art from many European museums and at the time it was not widely known that Hitler was doing this. As an Art History major I am very interested in reading about the looting of art during this time.
Before this film I had never seen a Charlie Chaplin film. I am so happy The Great Dictator was my first Chaplin film, it is incredible. The first time I watched this I was amazed with everything from the acting, writing, direction, characters right down to the sets. If you have yet to see a Charlie Chaplin film you must see The Great Dictator it is a true film masterpiece.

Posted by UneCinephile at 12:00 AM