﻿
“She may be his wife, but she's engaged to me!”
In my mind there is no reason why a comedy movie of any kind should be complicated to follow. I mean, come on, comedy movies are supposed to make us laugh and sometimes not think too hard about the plot or the jokes. Watching Libeled Lady I found the plot a little difficult to follow and at times pretty boring. I felt it could have ended sooner rather than later with the plot being alright at the beginning and then dragging by the end.
Spencer Tracy’s Warren Haggerty works for a newspaper who often runs stories about celebrities and socialites which more than not makes those celebrities and socialites upset. On the day Warren is supposed to be finally marrying his fiancé after many other times he gets a call to come to the office to clean up a new mess; socialite Connie Allenbury (Myrna Loy) plans to file a lawsuit for libel after the paper accidentally ran a story calling her a home wrecker. The paper brings in one of their former reporters and lady’s man Bill Chandler (William Powell) to help try to smooth things over with Connie.

Gladys (Jean Harlow), Warren’s fiancé storms into the office very upset and angry with Warren. The reporter gets a good idea, he has Gladys marry Bill and then Bill is to try to seduce Connie and have the “wife” walk in on them which in turn would truly make Connie a home wrecker leaving no room for a libel suit. From this arrangement problems arise such as Gladys really falling in love with Bill because Warren never seems to notice her and Bill and Connie really falling in love with each other.
There are some very good comedic moments in the film one provided excellently by William Powell. Bill goes fishing with Connie and her father but before that he had no idea how to fish. He has a professional come and teach him how the day before the trip. Once on the river he gets into the water and completely falls in going after a fish! The whole scene is really funny; Powell did some excellent physical comedy.
The acting was very well done by Powell, Myrna Loy, and Tracy. Tracy was the tough guy which he would play countless of times in his other films. Of course I adored Powell and Loy together; this was a film for them since they were so popular with the Thin Man films. Jean Harlow I had never seen before in a film and I have to say I was not impressed by her at all. I found her acting to be really annoying and by the end of the film I could not take her voice anymore. Even though I was not impressed by Harlow I am still willing to see some of her other films (I know there is possibly a reason for her being on AFI’s top 25 actresses of all times list) 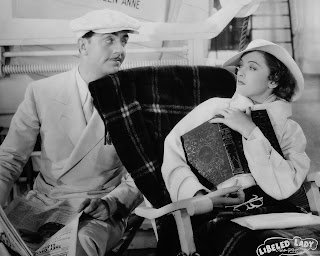 When the film was over I was left with the feeling that I really wanted to like it because of the great cast but all I could do was find it to be alright. I find that with some screwball comedies from the 1930s that they start off strong and really good and then just do not know how to end. The ending to this film was not good it was as if the writers were trying to come up with an unpredictable ending but they just made one that did not end and there was no resolution.
Libeled Lady is not a completely bad film that should be avoided. It was up for an Academy Award and actually lost to another Powell and Loy outing The Great Ziegfeld. The comedy is excellent there are lines in the script that really stand out and are delivered perfectly by the cast:
“What’ll we use for a headline”
“I don’t care. Anything, ‘War threatens Europe’”
“Which country?”
“Flip a nickel.”
Gladys says to a driver:
“Can’t you go any faster?”
“I can, but the cab can’t”
Libeled Lady does have its faults especially with the ending and its tiny bit of plot confusion but this is a classic comedy film that should be seen. 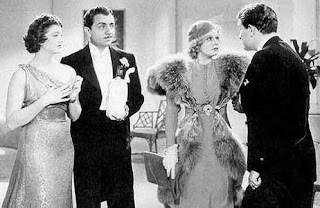 Posted by UneCinephile at 3:49 PM