“What is written in the stars must come to pass”
﻿
Thirteen Women is one of the earliest female ensemble films. No this is not a soppy story like The Women or is it a crappy “chick flick” that we are used to seeing today. The story is a great tale of revenge, of having a power to rule peoples’ lives by getting in their heads and manipulating their actions.
Thirteen women who are friends from their sorority days write to a clairvoyant for their horoscopes. Each woman receives a letter from the swami; what the letters have to say about their futures is not good. Their demise or someone close to them will be swift and out of nowhere. 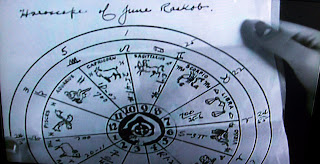 After three of the women have met their end, we see that the swami is not the one predicting the catastrophes; he has been under the control of Ursula Georgi (Myrna Loy). Ursula knew the thirteen women she had been a classmate of theirs but she was snubbed by them because she was a half caste. At school she tried to be accepted as white but the girls would not let her and she left the school in shame. While out with the swami she takes control of the man’s mind and makes him fall in front of a subway car. Now she is alone to exact her revenge.

Now the only women left alive is Laura Stanhope (Irene Dunne). Ursula knows Laura has a strong mind and will not easily be taken down so she enlists the help of Laura’s chauffer Burns. She has made Burns fall head over heels for her that he will do anything for her. Laura’s horoscope read that her son Bobby would die before or on his birthday. Ursula, through Burns, sends Bobby a box of poisonous chocolates and a ball full of explosives.
The police now know that Ursula is behind what is being called the Horoscope Murders and there is a call for her arrest. The detective assigned to protect Laura and Bobby tells them to leave California to go to New York. Even with the police protection Ursula manages to get on the same train as Laura.

As I watched this film there was a feeling that there was something missing. It feels like the story was just going up and up and then just stopped. There is plenty of suspense and you want to keep watching since the story is very good but at the same time the satisfaction of watching the film is not there.
Myrna Loy as the halfcaste Ursula Georgi was amazing. Watching Loy in this role it feels as if you are seeing an actual woman who has been snubbed all her life and the one time she had a chance to become someone different, to become a part of a white society, horrid girls with nothing better to do pushed her back down. You get the chills whenever you see her severe, evil stare. Ursula comes face to face with Helen, one of the thirteen women to be killed, on a train to California. Helen has suffered a horrible loss and carries her husband’s gun with her. Ursula talks about Helen killing herself to put the thought into the woman’s mind. When Ursula leaves the room she waits outside the door to wait for a gunshot. When she hears it the evil look of satisfaction is shocking. Loy just had the look she was perfect in this role. Up to this time she had been cast as an Asian or a vamp so this was not a far cry from what she had been doing. But what makes this character stand out and so evil is that you can see it on Loy’s face the gears in her head are constantly moving, you can see the evil inside her.

Although Irene Dunne is one of the greatest actresses of all time she was not very good in this film. She had just been loaned out to another studio and the film was a success so RKO was looking to capitalize on her recent success. She seemed very rushed and was way too over dramatic. Unfortunately since RKO wanted to capitalize on Irene Dunne two of the deaths in the film were cut so we only see eleven of the women meet their untimely endings.
Thirteen Women is a film to watch if you would like to see how much psychological thrillers and revenge movies have not changed. The story of revenge is great it is something different. The story may be of a woman scorned but it is in no way cheesy or annoying, it is suspenseful and thrilling and creepy.
Posted by UneCinephile at 9:06 PM